My thanks to Hingham Public Library for hosting us and “Suosso’s Lane” last week. I continue to be impressed by the number of people who to come our “Suosso’s Lane” presentations because of their prior interest and knowledge of the Sacco-Vanzetti, “the case that refuses to die.” And folks ask good questions, such as where were the defendants buried after the executions? I knew that Sacco and Vanzetti were cremated, but since I had forgotten the name of the cemetery, I wrote a clarification and posted it in Facebook: “Their bodies were cremated at the Crematorium in Boston’s Forest Hills Cemetery. In both cases the ashes were returned to family in Italy.”

A day later I received this reply from Luigi Botta: “a part of the ashes of Sacco ended the widow; a part of both the Aldino Felicani Committee; the remainder, divided, families in Italy, in Villafalletto and in Torremaggiore.”

The statement that some of ashes of each man’s remains were commingled and given to “the Aldino Felicani Committee” reminded me of something that I had read — namely, that the ashes had given to the Sacco-Vanzetti Defense Committee. That is surely what Mr. Botta is referring to, since Aldino Felicani was the head of that committee.

But I also remembered learning recently that Felicani’s Sacco-Vanzetti archive, consisting of records of the defense committee, letters, and other materials were donated by him to the Boston Public Library. I looked up what the library had to say about what it calls “The Aldino Felicani Sacco-Vanzetti Collection, 1915-1977.” According to the library’s three-page description of this collection, it includes the ashes of both defendants in the famous case.

Felicani, a friend of both men, led the Sacco-Vanzetti Defense Committee for the full seven years of its existence. He turned down other requests for the defense committee’s papers, including one from Harvard, because he wanted the collection to be stored in Boston, where he believed the case was centered. The defense committee’s headquarters were located on Hanover Street, the main avenue in Boston’s North End, a heavily Italian neighborhood at that time. (“Suosso’s Lane” — pardon the obligatory plug — depicts a tense scene in the defense headquarters during the last weeks before the execution when the committee’s lawyers sought desperately for some legal machinery to halt or delay the executions.)

I have been told by people better able than I to know that the library’s Aldino Felicani Sacco–Vanzetti Collection is the most valuable scholarly archive of information about the case.

It seemed likely to me that the ashes had been divided; some portion went to the defendants’ families and some to the committee. I decided to look for a neutral source. I found what appears to me a standard account of what took place in Boston after the two men were executed by electrocution at the Charlestown State Prison, including crowd estimates (made at the time by sources such as the Boston Globe) of the Sacco and Vanzetti funeral, often described as the largest ever public gathering in the city of Boston until the celebration for the Boston Red Sox World Series championship in 2004.

The funeral was held at the Langone Funeral Home on Hanover Street in Boston, where “more than 10,000 mourners viewed Sacco and Vanzetti in open caskets over two days.” (From Wikipedia: https://en.wikipedia.org/wiki/Sacco_and_Vanzetti)

On Sunday, Aug. 28, “a two-hour funeral procession bearing huge floral tributes moved through the city. Thousands of marchers took part in the procession, and over 200,000 came out to watch.” Police would not allow the march to take its intended route past the State House and “at one point mourners and the police clashed.” The Boston Globe termed these events “one of the most tremendous funerals of modern times.”

The funeral march was an eight mile hike to the cemetery, during which the marchers — according to Francis Russell’s “Tragedy at Dedham” — were attacked more than once by “Red-hating” residents of the neighborhoods they marched through. This fact does not appear in the Wikipedia account.

After “a brief eulogy,” the bodies were cremated in Forest Hills Crematorium, one of the first such facilities in the city. The Wik account concludes: “Sacco’s ashes were sent to Torremaggiore, the town of his birth, where they are interred at the base of a monument erected in 1998. Vanzetti’s ashes were buried with his mother in Villafalletto.”

I’m thinking that all of these accounts are true: Some of Sacco’s ashes were given to his wife, Rosina; some sent to his family in Italy. Some of Vanzetti’s ashes were sent to his family in Villafalletto in the north of Italy. Some of each man’s were commingled and given to the committee; this portion now presumably resides in the Boston Public Library.

I am grateful to Mr. Botta for his comment and the information. In a clear case of “Facebook goes international,” Mr. Botta works in Italian, at least all the information Google provides on him is in that language. Yet after I posted the paragraph above stating my conclusion about the complicated distribution of the men’s ashes, Mr. Botta wrote back stating clearly, in English, that this is his understanding as well, following consultations with many sources. I am grateful for his information. 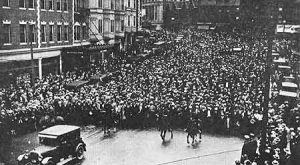 As has been observed by others, Sacco and Vanzetti is “the case that refuses to die.”