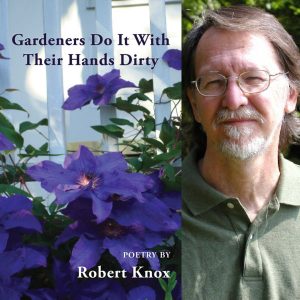 My first collection of poems, “Gardeners Do It With Their Hands Dirty” is scheduled for release in March. These are poems about plants, gardening, flowers, nature, talking to trees, getting stared at by a hummingbird. Seasons change and so do we. Also poems about family, places near and far, my father’s near-fatal in World War II, family secrets, The Sacred Way at Delphi, Greece, Syrian refugees in Beirut, and a tricksy formal poem called The Slow Tritina.

The book’s publisher, Finishing Line Press, designated the book as its book of the day a few days ago. Here’s the link to the publisher’s pinterest posting: https://www.pinterest.com/pin/299630181444780831/

Here’s a brief description of book for the publisher’s promotional material:

Robert Knox’s well-tended garden of verses discovers a universe in a perennial flower garden. A reporter and a novelist, his poems are as immediate as today and as universal as the weather.

You can pre-order the book (or just take a peek) at this link: https://www.finishinglinepress.com/product/gardeners-do-it-with-their-hands-dirty-by-robert-knox/

Here is a fuller description of the book’s contents.

The poems in “Gardeners Do It With Their Hands Dirty” discover a universe in a perennial flower garden. A reporter and a novelist, Robert Knox’s poems are as immediate as today and as universal as the weather. The characters in these poems are May and September, roses, asters, morning glory, anemone, honey bees, squirrels and hummingbirds. These poems followed a garden lover’s decision to dig up all the grass at his Boston area home and plant flowers, both perennials annuals, ground covers, shrubs, a small tree or two, berry bushes, and vegetables. To  be an amateur means to do something not for money, but for love. A few summers later the garden blossomed, and the poems grew from the voices heard while tending the plants, pulling weeds, trimming old growth, planting anew. While Knox is an amateur gardener, he’s a professional writer, with a thousand bylines in the Boston Globe and other new newspapers and periodicals, writing news, features, op-eds, book reviews, and arts and entertainment columns. His fiction and creative nonfiction stories have appeared in various literary periodicals. He is a contributing editor for the online poetry journal Verse-Virtual, and his novel on the Massachusetts roots of the Sacco-Vanzetti case, “Suosso’s Lane, has won praise from readers and reviewers.

When the gardener goes indoors, he remembers history: a father’s wartime brush with death, family crises, his own slow dance with youthful dreams. In the greater world preschoolers dash across busy roads, adult children have childlike birthdays, and Syrian refugees beg on the streets of Beirut. The poems in “Gardeners Do It With Their Hands Dirty” also visit idyllic Greek islands, take a journey along the Sacred Way to ancient Delphi, discover an old wooden wall that survived a decade and a half of ruinous civil war and the furious reconstruction of Lebanon’s capital city, and reflect on winter nights filled with silent buses and Chinese spices while the stars go on telling stories of their own. As his lines saluting an urban balcony garden (from “The Leaf Washers”) proclaim, we celebrate our own lives when we cherish the leaves in our  garden: “They mediate the base of things, the fundamentals,/ Molecules, waves, atoms, energy-matter – the rain in Piccadilly,/ The fountains of Beirut, the voices of the stars.”