The black-and-white photo below pictures a moment in the  round-up of immigrants in America 100 years ago. The suspicious ‘outsiders’ are white-skinned people from southern and eastern Europe — Italians, Jews, Poles, Russians, Greeks, Serbs, Ukrainians, Lithuanians. The mass round-up of immigrants took place during the period of political hysteria of targeting and removing the devils who live and conspire among us known as the Red Scare of 1919-20. Our government was convinced for that two-year period that ‘radical’ foreigners were plotting a revolution to turn the US into a Communist state such as Soviet Russia.

I will be speaking, “Suosso’s Lane,” my novel that depicts this dark time in American politics, at the Ventress Memorial Library in Marshfield MA on Thursday, April 13, 7 p.m. “Suosso’s Lane” is based on the Plymouth origins of the infamous Sacco and Vanzetti case, in which two Italian immigrants were convicted for a crime without substantial evidence against them in 1921 and executed in 1927 despite wide international protests. “Suosso’s Lane” is the first novel about this great 20th century cause since Upton Sinclair’s book (titled “Boston”) published in 1929. “Suosso’s Lane” has received praise from readers and reviewers and been the subject of a dozen public book programs. At Marshfield next month I will be speaking about the anti-immigrant hysteria of 100 years ago and the pejorative measures targeting certain immigrants by the current US administration today. 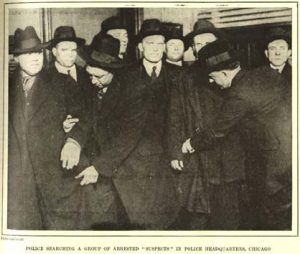 The photo at the top of this post is a contemporary image of an example of today’s politically driven anti-immigrant measures, as an ICE officer takes part in a roundup of “undocumented immigrants.” The victims are likely Latinos or people from the Middle East. It’s great to see that American democracy has made such progress over the last century, so that we don’t keep making the mistake of blaming our problems on ‘outsiders’ who don’t really belong here.

This photo was taken as immigration agents dragged a handcuffed father away in a black car on March 3. The father was driving his 13-year-old daughter to school when macho, black-clad agents “unleashed” by the liar in the White House seized him. According to KABC-TV in Los Angeles: “U.S. Immigration and Customs Enforcement agents pulled Romulo Avelica-Gonzalez’s vehicle over Tuesday about a half mile from a school where the undocumented immigrant from Mexico had just dropped off one of his daughters. The dad, 48, was driving daughter Fatima Avelica to another school in the northeast Los Angeles neighborhood of Highland Park when ICE stopped them. Left behind in the car with her mother, Fatima wept inconsolably as she captured video of her father’s detention. Rosary beads hung from the rearview mirror. A palm-frond cross rested on the dashboard.

I’m sure we’re all feeling safer now that Fatima’s father will be detained and deported. A man who works for a living, drives his daughter to school, and decks his car with rosary beads and palms is clearly a threat to the new administration’s vision of “America-First.
Some reality checks.
Immigrants contribute to the American economy and help it grow, rather than taking from it. They do the jobs we don’t want. If you want to compete with them for office cleaning, house-cleaning, fruit-picking, McDonald’s- serfing jobs they spend long hours on every week to sustain themselves, go ahead. Americans vote for charlatans who promise them ‘good jobs,’ not the ones that are out there. If more of us were willing to work for minimum wage — and we’re not — maybe we would all get behind raising it.
Reality check number two. Studies show immigrant are far less likely to commit crimes than native-born citizens. Makes sense. Why would people who have risked everything to come here risk getting sent back to the hell-holes they worked so hard to escape?
Number three. Immigrants pay substantial taxes, paying out to the government more than they receive back. Undocumented immigrants in particular pay more taxes than they receive from public programs because they are not eligible for government services, including major programs such as social security, medicare and food stamps. They do not receive tax refunds because they do not file returns.
Life is hard without documents.That is why many of the undocumented acquire false Social Security cards — many employers require a Social Security number to hire them. Ironically, using a false number is the “crime” that gives ICE the excuse to arrest and deport them since now they are ‘breaking the law’ by trying to work and live like the rest of us. Think about this: yes, they arrived her without documents, but now they are trying to play by all the rules.
So, final thought, wouldn’t it be easier — not to mention more humane — to give them the Social Security card, put them on the books, license them to drive, etc., and harness the abilities and energy they have already demonstrated to help America grow as a prosperous and just society?