I have four new poems online this month on Verse-Virtual.com, the online poetry journal for which I serve as contributing editor, including a political parody entitled “From ‘Trump the Musical.'”

Here’s how the poem begins:

From “Trump the Musical”

Ohhh nooooh….
You can’t say that!
What’s next?

Our leader’s a stumbling Dump
He’s a ghoul in the night that goes bump
He leads us a dance in his fat underpants
That careens through a ball banned in England and France
To a scam that goes flat with a lump — Where’s the pump?

We’re locked up in an ugly McMansion
In a suite of retreat lacking scanscion
The grounds are a mess, with a pool merely cess
The Superfund techies are dying of stress
In a-base-ment of dirty old man-fun

Pleeez…pleez!
No more of that!
What’s next?

Poor Dump is awash in old paper
He’s looking for help from a neighbor
There’s a favorite loose cannon, his name is ol’ Bannon
Who fires his mouth-piece, all fouled up with race-grease
And burns down Dump’s house with his caper

Oh, my!
Is that gun smoking?
What’s next?

…. to read the rest of the poem, see http://www.verse-virtual.com/robert-knox-2017-february.html

One of the other poems in this issue is based on a photo of a Great Blue Heron by fellow poet Jim Lewis. Jim posted his photo on Facebook and challenged other poets who write for Verse-Virtual.com to write a poem inspired by looking this bird in the eye. My response to the challenge begins…

You see me, as always, before I see you
You turn on a corner of the wind
where the air meets sky and the scent
of salt marsh bathes the hours
I know you by the killer eye in your bone arrow,
your linear head-piece head-on to the future
that houses both sense and brain, and the rapier jaw,
the needle of thought sewn through sky and brine,
the silvery flesh of life in the quick
and the ocular penetration,
right-angled from your dagger stab

… to read the rest of this poem and all the others in the February 2017 issue of Verse-Virtual.com, see http://www.verse-virtual.com/poems-and-articles.html 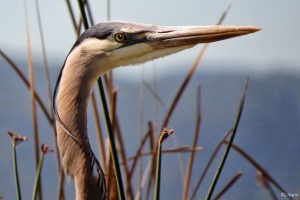