↓
Home→Suosso's Lane→I’ll Be Reading From and Speaking on “Suosso’s Lane” at Pilgrim Hall on Nov. 2

“Suosso’s Lane,” a book named after a street in North Plymouth, has some considerable history in West Bridgewater. The prosecution theory, to use the word loosely, of how Bartolomeo Vanzetti and Nicola Sacco were involved in the robbery of the shoe factory payroll in South Braintree Square and the killing of two payroll officials, goes back to a house in West Bridgewater that was rented to an Italian anarchist — not Vanzetti, not Sacco, not anyone they were involved with.

I spoke on the book at West Bridgewater library on Thursday, Oct. 27, and left that  informative gathering with more local knowledge than I went in with. Apparently, the pleasure was mutual. “Your presentation was terrific,” library director Ellen Snoeyenbos wrote me afterwards. “I couldn’t have asked for a better event!”

I’m looking forward to speaking about “Suosso’s Lane” again this week at Pilgrim Hall in Plymouth on Wednesday, Nov. 2, at 7 p.m.It’s free. I hope to see some friendly faces there.

The house in West Bridgewater that played a crucial role in the notorious Sacco-Vanzetti case was known as Puffer’s Place (after an original owner) and was rented in the spring of 1920 to Ferruccio Coacci, one of the many foreign radicals caught up in the Red Scare repression of 1918-1920 and scheduled for deportation to Italy. Bridgewater police chief Michael Stewart, who hated foreign radicals — as law enforcement personnel and other Americans were then being encouraged to do by their government, their newspapers, and politicians — was asked by federal officials to visit Coacci and remind him to report for deportation. Coacci alibied; he was perfectly content to return to Italy, he told police, but his wife was sick. A couple days later Stewart’s men visited the house a second time and found not Coacci, but another Italian anarchist, Mario Buda, there. Buda, who went by an anglicized version of his name, Mike Boda, said he was sharing the rent with Coacci. Coacci and his recovered wife walk out of the story at this point by taking a boat back to Italy.

However, what happens next is the car used by the Braintree payroll robbers is found abandoned in the woods in another part of Bridgewater, two miles away from Puffer’s Place. Chief Stewart puts these two facts together — in the one hand I have an anarchist, and in the other the car used in the crime (two miles away) — and concludes, ah ha, anarchists must have committed that crime.

So now he is interested in ‘Mike Boda.’ He goes back to Puffer’s Place and this time Buda, developing suspicions of his own, sees the police coming and climbs out a window in the back of the house to escape their attentions. However, he has already left his automobile to be repaired in the nearby shop of a mechanic named Simon Johnson.

On Thursday when I spoke on “Suosso’s Lane” at the West Bridgewater Library, one of the men in attendance gave me a local place name for the location of Johnson’s s garage.

Chief Stewart, committed to his anarchist suspicions, learns of this and tells Johnson that if anyone comes for that car to call the police immediately. The police want to talk to him.

What happens next is what I call ‘The Nightmare Scenario.’

Buda apparently attends a meeting of the anarchist gruppo that meets in East Boston. Sacco and Vanzetti attend this meeting, and the group decides that any literature in the possession of their anarchist comrades should be collected and hidden somewhere so that the police do not find it and connect them to the bombings that took place a year ago. Sacco, who has already bought tickets from himself, his wife and son on a boat back to Italy because of a death in his family, and Vanzetti, who is staying with his friend in Stoughton to help him pack up his household, agree to go with Buda and a fourth anarchist to collect this anarchist literature.

Buda persuades them to meet him one night at Simon Johnson’s house to retrieve his car and make it easier to do this job. Buda arrives with another anarchist comrade, Ricardo Orciani, on the latter’s motorbike. Sacco and Vanzetti, who lack any transport, take a streetcar that brings to West Bridgewater. The four men rendezvous at Johnson’s house. The car mechanic stalls, while his wife slips out to call the police from a neighbor’s house.

In “Suosso’s Lane” I dramatize the encounter. When Johnson tries to talk Buda out of taking his car away, contending the vehicle has no plates, Sacco voices his suspicions over his wife’s departure from the house.

He says the situation smells to him like “di trappola.”

That’s how it turns out. Buda and Orciani ride away on the latter’s motorbike, and the police never get their hands on either of them. Sacco and Vanzetti walk back to the streetcar stop and board a car to take them to Brockton, where they can catch a second streetcar to Stoughton. The police arrive at Johnson’s house after the four men have departed, but hearing that two of the men were on foot, they call the Brockton police and ask them to stop the car from West Bridgewater and arrest “two foreigners.” That’s what happens. A Brockton officer arrives in time to stop the street car and finds Sacco and Vanzetti on board.

They are ‘foreigners’ to his eye. And that’s why they’re arrested.

And they are “indeed anarchists,” as Vanzetti would later tell the court. That combination — anarchist beliefs and Italian birth — turns out to be enough to get them convicted, and eventually executed, after a trial widely regarded as a travesty of justice and still studied by trial lawyers as a classical example of the problems with capital punishment.

I look forward to sharing ‘the nightmare scenario’ and other elements of “Suosso’s Lane” on Wednesday evening at Pilgrim Hall. 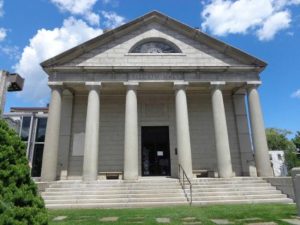