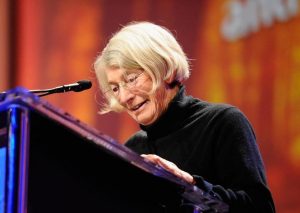 Mary Oliver, who died on Jan. 17 at age 83, was probably America’s favorite contemporary poet. As one obituary I read points outs, she was rare in possessing both a large popular following and sufficient respect from the literary prize-givers to be awarded a Pulitzer Prize and the National Book Award. Commentators often used the word “accessible” in explaining her popularity.

But accessibility is the very the quality that kept some academics at arm’s length: Not only does her work offer spiritual consolation, her poems simply weren’t ‘difficult’ enough. They didn’t need critics and scholars to explain what they ‘meant.’

One of Mary Oliver’s best loved poems, cited in a number of the appreciations and obituaries written since her death, is “In Blackwater Woods.” The title itself is an interesting choice, because the poem itself offers so many opportunities for a grander statement. But the poet eschewed grand statements in choosing a title, perhaps wary of the grandiose.

The poem could have been titled “Fulfillment,” “Learning,” “Salvation” or even “Spring,” or something with that big word ‘spring’ in it; or of course “letting go.” Others have named their poems “Letting Go.”

I think the title was meant to suggest ‘no grand claims are being offered here,’ though in fact the grandest ones do arrive — naturally. I think the chosen title understates the ambition of the poem.

Look, the trees
are turning
their own bodies
into pillars

of light,
are giving off the rich
fragrance of cinnamon
and fulfillment,

of the ponds,
and every pond,
no matter what its
name is, is

nameless now.
Every year
everything
I have ever learned

in my lifetime
leads back to this: the fires
and the black river of loss
whose other side

is salvation,
whose meaning
none of us will ever know.
To live in this world

you must be able
to do three things:
to love what is mortal;
to hold it

against your bones knowing
your own life depends on it;
and, when the time comes to let it go,
to let it go.

The poem consists entirely of common words and is structured in four-line, free verse stanzas. The formal patterning of the stanzas creates that ‘certain formal feeling’ that Dickinson famously borrowed from standard English hymns. The structure also helps establish a certain expectation, the one that reminds us that ‘poetry’ has the same origins as ‘song.’ Yet you could write the words and sentences out, just as they are ordered here, in a paragraph, and the result would read like prose. It would be grammatical.

But this is poetry — i.e. the intensification of feeling — not prose.

The lines are very short, frequently consisting of only two, three, or four words. This is a common approach to free verse, popular for a century or more, reminding us of William Carlos Williams’ iconic miniature “So Much Depends.” The basic approach to enjambment in this sort of free verse — where to end the line — is to follow spoken English syntax. But in this poem the poet frequently breaks syntactical units into even smaller pieces.

“Look, the trees” therefore stands by itself as a line. The enjambment turns these three words into a (temporarily) completed statement: ‘Look! the trees.’ Almost everybody who writes about nature has written something like this. It’s Thoreau’s advice on achieving wisdom and spiritual freedom: look at trees.

The lines that follow show that each foreshortened statement is a cause of wonder. Imagine this: trees/ ‘are turning’ — yes, we think, we know trees turn — ‘their own bodies’…              Imagine that! Sometime human beings do try to turn ‘their own bodies’ into something else, but it usually involves new clothes

‘into pillars’ — yet another miracle!

And then — wait for it — which is exactly what the stanza break following this two-word line makes us do — “of light.”

Each of these steps to the completed clause, a grammatically complete statement, is itself a marvel, and the tiny pauses — which the eye of the reader respects, even if the brain rushes on — gives the reader’s mind pause as well.

Then, there is the matter of poet’s chosen words.

Patterned syntax keeps the sentence alive in the second stanza. We are often told that poems appeal to the senses; here’s an example. Those same trees that wondrously turn themselves into pillars of light, are also, as we read in the second stanza “giving  off the rich/ fragrance of cinnamon/ and fulfillment.” Poetry imagines with the guidance of the senses. Because we know the scent of cinnamon, we are more likely to make the leap to “fulfillment.” We don’t ‘smell’ fulfillment physically; only metaphorically. And fulfillment is one the themes of the poem.

Following syntax once again, a new stanza offers yet another completed clause — all these clause follow the familiar Biblical and classical imperative “Look,” the poem’s first word. A classical guide would typically follow that word with an exclamation point. A century ago English poet-novelist D.H. Lawrence wrote “Look! We have come through!” — a poem about not destroying your marriage in the first few months.

But Mary Oliver eschews the exclamation point for the modest comma, as if to say to the reader, ‘you will shortly discover these wonders yourself.’

This third stanza offers a new clause — pointing out a new wonder — beginning with”the long tapers/ of cattails” Again, an appeal to the senses, the word ‘tapers’ offers a description of what cattails look like, but also suggests another meaning of the word ‘tapers’ — candles — building on the comparison of trees to “pillars of light.”

This stanza then completes with the marvelous metaphor of “the blue shoulders” — pause for stanza break — “of the ponds.”

Through the remainder of this short poem, the line breaks largely follow the ordinary divisions of syntactical units, but often vary a single word away from the natural break point. So we learn that every pond “no matter what its/ name is, is/” — stanza break — “nameless now.”

The foreshortened syntax, I believe, reflects the interruptions in our conventional thought patterns brought about by the experience the poem seeks to express. The rebirth of nature is the great interrupter of ordinary patterns of thought. Human events are commonly shaped into stories; they have a beginning, a middle and an end. But the life the world — its trees and its ponds — exceeds these patterns. Nature, as understood by the seasons, has a beginning, a turn, an end — and then, guess what? — a new beginning.
The last five stanzas of this marvelous poem are almost as pointed in their meaning as a sermon, even incorporating the daringly loaded term “salvation.” “Every year,” the poem tells us, and “everything” the speaker has learned,

“leads back to this: the fires
and the black river of loss
whose other side

is salvation,
whose meaning
none of us will ever know.”

And as if that were not ‘meaning’ enough for any poem, much less any beautifully descriptive ‘nature poem,’ the poet offers a frankly prescriptive advisory on how to live.

“To live in this world,” she tells us, “you must be able/ to do three things:”

You can go back to the poem and read those three things yourself.

Then ask whether you have heard or read a better, more economically stated expression of three such important ‘things.’ Many of us — readers, that is, who turn to poetry rather than to creeds for sustenance — are likely to come away (as I am) from this poem resolved to take these words to heart, to remember them, and to live their message.

And many of us are likely, or at least tempted, to believe (perhaps as a matter of faith) that Mary Oliver did just that.

(To check out more of essays on poetry, and other subjects, see www.prosegarden.blogspot.com