At Tuesday night’s program at the Quincy library, historian Robert D’Attilio told us that Hollywood was ordered by government officials to destroy all newsreel footage of Sacco and Vanzetti’s funeral march. Here’s an account of the funeral: “a two-hour funeral procession bearing huge floral tributes moved through the city. Police blocked the route, which passed the State House, and at one point mourners and the police clashed.” After a brief eulogy at the Forest Hills Cemetery, the bodies were cremated. “The Boston Globe called it ‘one of the most tremendous funerals of modern times.'” 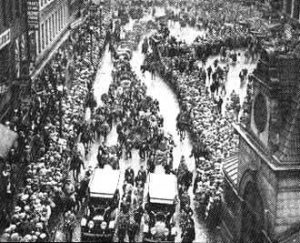