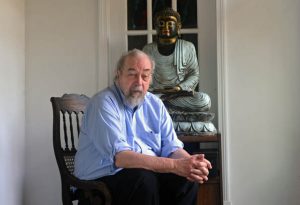 Karma, the belief that our actions in this life, plus some influence from whatever is hanging around from our previous existences, determines our condition in our next life, is a word a lot of us use in informal ways. It’s the theme of this month’s Verse-Virtual.com, the online poetry journal, in homage to the recently deceased poet Dick Allen (pictured above), who explored Buddhist ideas in some of his later work… And it’s an idea that can go in a lot of directions.
In the classical Hindu theory of reincarnation, the sum of your moral conduct will determine the state of your next incarnation. Will you be reborn as a higher-status individual, or a lower one? Or as an animal? Or possibly even an insect? So don’t step on that ant; he may come back as your boss.
In the American vernacular “karma” tends to be used loosely to suggest a cosmic connection of any sort between past events and present ones. Did the IRS send you an unexpectedly large refund just when you needed it, after you spent a lot of time last year volunteering at a nursing home? It’s karma. On the other hand, if you’ve been nasty to someone at work, then someone is mean to you later that day, or the next day, or the next week. And a part of you feels, ‘well, maybe I deserved that.’
In response to Verse-Virtual’s theme for the February issue, I contributed three poems on ways of thinking about karma.
The poem “International Karma” connects the violence two communities inflicted upon one another in the past as warring allies of World War II enemies England and Japan to the assaults the Buddhist Burmese majority are currently inflicting on the ethnic minority Rohingya, who are Muslims.
In another poem , called “Christmas Karma,” I draw on one of my long-time favorite short memoirs, poet Dylan Thomas’s  nostalgic “A Child’s Christmas in Wales,” in order to consider whether a creative work evoking a love of the world can help make a better future for us all. Here’s the poem
Christmas Karma
Dylan Thomas died
emptying pint after pint in a Village bar
a year after recording
his “Child’s Christmas in Wales,”
that beautiful lie of reminiscence
evoking a Wordsworthian universe of childhood
wonder, but packing in more people,
makes of the Welsh sea-town a country of memory
even for those who have never set foot there
Furry uncles, cat hunters, peripatetic postmen
icing downhill in a one-footed dance step,
the wine-fueled effusions of a large-busted thrush,
the candy-ciggo cut-up kid
with beret, high socks, leather shoes,
snowballing buddies, ghostly voices,
the close and holy dark

The goodness of the words outlives the life
feeding a world of feeling seldom found
in particular memories of our own
more mass-produced childhoods
Is this the immortality of the soul
that rolls from recollected visions
into other lives, like seeds
of a future harvest?

To read more poems on karma and on other subjects  see http://www.verse-virtual.com/poems-and-articles.html