My poems about Greece are up on Verse-Virtual.com, the online journal that publishes a big batch of new poems every month.Here’s the link for the poems: http://www.verse-virtual.com/robert-knox-2016-july.html

Greece is both a country with an ancient civilization and, judging by our recent visit, a population that refuses to grow old. Hence the phenomenon of bearded, well-fleshed motorcyclists that we encountered on busy thoroughfares throughout the country. It’s not just “Ancient Greece” we encounter on our visit, but a very lively contemporary society.

The prevalence of active graybeards on bikes put me in mind of a famous fist line from one of W. B. Yeats’s most celebrated poems: “This is no country for old men.” This sentence is probably best known today as the title of a film by the Coen brothers that won a best picture Oscar in 2007. That film was based on a novel by Cormac McCarthy, who of course borrowed from Yeats’s poem for his title.

The poem we’re all borrowing from is “Sailing to Byzantium.” a work gleaming with brilliant, enduring phrases. The poet’s notion of old men is represented this way in the second stanza:

An aged man is but a paltry thing,

A tattered coat upon a stick, unless

Soul clap its hands and sing, and louder sing

For every tatter in its mortal dress,…

For the rest of the story, see my blog: 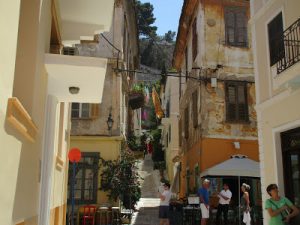