Today is Primo Maggio (the first day of May), celebrated as Labor Day in much of the world, though not in the United States, to remember the achievements of the trade union
movement in bettering the lives of working people. According to the Italian version of Wikipedia (through a dodgy translation), “the holiday marks the workers’ struggles, especially those aimed at the conquest of a precise right: the daily working hours shall be eight hours.”

Most of us have worked a 40-hour week, or something close to it, at one time or another. If we work in offices or professions with ‘regular’ hours — banks, insurance, law offices, finances, dentists, retail, the “9 to 5” world of secretarial or clerical or sales jobs — the 40-hour standard plays a role in the calculation of our working week. With built-in allowances for lunch, some employers describe their work week as 35 or 37.5 hours.
Those of us born during the Cold War era will probably associate May 1st as the day when TV news showed us pictures of large, darkly threatening parades in the Soviet Union marked by a display of military might, lots of tanks and trucks pulling artillery pieces and jets flying overhead. And perhaps similar displays for press-ganged crowds lining the streets in East Berlin, Warsaw, Prague and the other capitals in the Soviet bloc.
Like most everything that happened during the Cold War, the state-sponsored military parade was a perversion of a significant idea. Around most of the world May Day commemorates the struggle of workers — a class of employees distinct from owners, bosses, management, or stockholders — to achieve an eight-hour day. A struggle that began in the USA.
“Few Americans seem to realize that May Day came about to memorialize an American event — the execution of the Haymarket martyrs in 1887,” anarchist historian Robert D’Attilio wrote in a book review 20 years ago.

The eight-hour day was what workers in Chicago’s Haymarket Square were rallying for in 1886 when a bomb went off and riot broke out, killing and wounding both workers and police.
The history of May Day (or “primo maggio”) begins there.              It’s important to keep in mind that in the decades following the Civil War, when industrial expansion took off in America, the standard working week was the 60-hour, 6-day week. Given that activities on Sunday were restricted by rules requiring busin 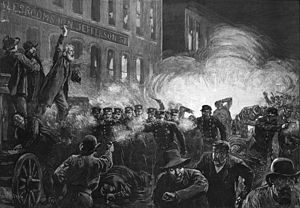 esses to be closed on the Sabbath, the lives of industrial works were largely restricted to labor, sleep, and the tavern. Seeking a nationwide 8-hour day, thousands of workers throughout the United States went on strike on May 1, 1886, and big rallies were held to back the demand for the “Eight-hour day with no cut in pay.” Nationwide up to half a million workers went on strike, and about 10,000 turned out in Chicago for a demonstration.
A confrontation between workers and strike-breakers at the gates of the McCormick factory in Chicago turned deadly when police fired on and killed two workers. Labor leaders called for a rally in response the following day in Haymarket Square. When police decided to break up a peaceful meeting, someone threw a bomb in their direction, killing one officer and wounding 6 others.  Then police began firing in panicky confusion into the fleeing crowd, killing four demonstrators and wounding scores of others.
In a dark and crowded setting police officers also mistakenly fired at one another. Accounts of final casualty figures differ; but a rough consensus is that seven policemen and at least four workers were killed; some 60 policemen were wounded and estimates of wounded civilians run even higher.
The official response concentrated solely on the bomb-throwing, for which anarchists were blamed without evidence. The rally’s speakers were also arrested and charged with causing a riot. In the end 8 strike leaders, 5 of them German immigrants,were put on trial for murder, without evidence that any of them had thrown the bomb. Seven were sentenced to death, one to prison.
Internationally, the event played out much as the Sacco-Vanzetti case would 40 years later. Demonstrations were held to mark the May 1st execution of the “Haymarket martyrs,” and may countries recognized May First as an official labor holiday.
In the United States, our government chose create the Labor Day holiday in September because American politicians wished to distance it from a cause celebrated by labor and other left-wing groups.
But we should remember that when workers in other countries (and, occasionally, here) celebrate May First, they are commemorating a struggle for the 8-hour day that began in America and the American labor leaders who paid for that cause with their lives.