My thanks to the Carver Library for hosting “Suosso’s Lane” and me on a beautiful Saturday afternoon (May 14). We had a lively question and answer session after I finally finished talking. I met a couple of folks there who had strong family memories of life on Suosso’s Lane or elsewhere in the North Plymouth neighborhood. One person told me about living across from the Amerigo Vespucci Hall on Suosso’s Lane. 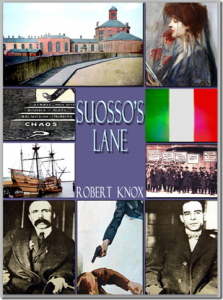 This Italian-American clubhouse had a low a profile when I lived in Plymouth, but back in the day (Vanzetti’s day) it housed the 1916 strike meeting when charismatic Italian anarchist Luigi Galleani came to address the Plymouth Cordage Company strikers. As an American place name, the Vespucci Hall retains its status because of its connection to Vanzetti. If you Google it, you find Beltrando Brini’s marvelous oral history recollection of Vanzetti, and his family (from the book “Anarchist Voices”), in which he states:
“There was also a social hall on Suosso’s Lane, the Amerigo Vespucci Hall, but that was for the generals community, not for the anarchists.”
(Just for you information, Google’s second mention of the Suosso’s Lane Vespucci Hall comes from an earlier post on my blog http://prosegarden.blogspot.com/2016/05/the-garden-of-experience-libraries-and.html

I want say thanks also to the “men’s” book club in Plymouth that invited to sit in (and fed me) at their meeting last weekend to discuss “Suosso’s Lane.” I was very flattered that a group that tends toward serious nonfiction chose my novel — ‘historical fiction’ as one of the members referred to it (the terms ‘mystery’ and ‘potboiler’ also came up) — as its book for discussion.
Their questions were penetrating. “Do you also write poetry?” one of the group’s good doctors asked.
Bing! Bing! Bing! A little birdie comes down with an envelope, and cash is awarded.
Other questions: Did I have a role model for the character of Lavinia? No, I just knew I wanted her to be very smart, very articulate, and the proto-feminist of her era, which is to say a suffragist. Someone who could stand up to Vanzetti on intellectual grounds, while brushing off the snubs of her own old-line Plymouth community.
Members also shared with me their personal acquaintance of the Sacco-Vanzetti case, mostly dating from older family members — the left-leaning intellectuals of earlier generations. How is it that earlier generations could proudly call themselves members of the socialist workers party or progressive labor or even the American Communist Party — but since mid-20th century America it has not respectable and in fact materially dangerous to acknowledge any of these connections — or even these once widely-shared beliefs?
The answer in practical, historical terms, of course, is McCarthyism and is proscription of ‘Communist’ ideas (for instance, atheism). But McCarthyism is sixty-five years old (ready to sit in a rock and collect Social Security), so can’t we finally get over this mental straitjacket fitted over the American political mind?
Other questions. My 21st century character Mill — was he based on myself. Oh no, I hope not… But yeah, there’s something to that idea. I have a guy increasingly obsessed with the Vanzetti story, his time in America, his particular ‘once upon a time in America…’ So yes as a reporter and then just as a reader, before I started writing a book based on the Vanzetti experience, I did grow increasingly fascinated by the vivid history of his life and times.
And I’m flattered, and happy, that others have found something to engage their attention and provide some storytelling pleasure in the book that derives my own attraction to a largely forgotten piece of local, and American, history.