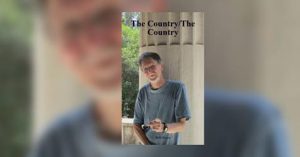 We’re moving into the final week of my serial novel “The Country/The Country,” with postings scheduled for today, Friday, and Monday, Nov. 5  — the day before our own crucial Congressional elections.

Here’s the set-up of my political novel that is part fantasy, part satire, and part reflection on what’s taking place in our county today: The novel’s principal character, who goes by the single name of Keel, is a former college teacher pressed into early retirement by the declining interest in his academic specialty, classical philosophy. The chief antagonist is the wealthy businessman Karol Pegasso, who heads the international cartel Animal Firm and whose political theories involve more frankly brutal tactics than even those currently on display in American politics. After a long period of peace and moderate prosperity in The Commonhope of UZ (a fictional country with resemblances to our own), fears of economic stagnation and social change are driving  the candidacy of a new kind of leader. Called “Pig” by his supporters, who pack angry rallies to show their eagerness for vague, sweeping concentrations of power, Pegasso dominates the early rounds of his country’s complicated election system and appears a near certainty to be the county’s new chief executive. But when citizen Keel discovers the graffiti “Kill Mr. Pig” in his own neighborhood in the middling city of Monro, the desperate call of a potentially violent opposition both frightens him and arouses a deep patriotic urge to make a difference. Chance, or something else, brings him into conflict with local Pig supporters, and into psychic connection with an old woman of unusual powers (Mrs. Nathan). He also encounters a network of mysterious “watchers” monitoring the activities of the Pig campaign in Monro and a local dog officer who has ties to both Pig supporters and opponents. And when Keel travels to the backwoods hideout of Mrs. Nathan, he is told to be ready to play his part in stopping Pig’s momentum.

In the most recent segment, posted earlier today, the electoral crisis in The Commonhope of UZ — that fictional country much like our own — is drawing to a head. Leading candidate Karol Pegasso, known as Pig, the autocratic candidate who manipulates his country’s creaky Voting system — intimidating opposition voters and casting a mind-control spell over his own supporters — orders his backers to march on the nation’s Capital and install him as their new leader. In the darkness before dawn Citizen Keel broods on taking matters in his own hands in a wholly uncharacteristic act of violence. But in her hideout in the hills, opposition leader and seer Mrs. Nathan calls on ancient spirits for assistance and receives a message, from somewhere, concerning “a wall of flesh.”

If you’re just getting started click on the word “chapters” and pick the chapter you wish to read.

Finally, here’s an excerpt from Chapter 45. We begin with the drama taking place in the thoughts of the seer Mrs Nathan:

It had been harder, harder than she remembered, to get the ancient ones’ attention. Was that because she was older as well?

But, hey, they were the ancient ones. They shouldn’t have any problem with ‘old.’

Still, she argued (with herself), if you pursue something that isn’t ready yet, you simply push it further away. You cannot grasp the ineffable with both hands and pull it from its hiding place. You only cause it to shrink away and hide deeper in the darkness, which is always there, which is spinning toward the dawn in its own good time. You have to wait.

But it was hard to wait.

Sometimes Mrs. Nathan found it hard as well merely to keep her eyes open. She did not wish to miss the call when, eventually, it came. It was hardest of all to remain powerless as the Leading Candidate moved toward what was clearly meant to be the Last Campaign. The minds of her followers, the workers and messengers of her hive, have supplied her with images enough to show her what was happening in the darker, scheming mind of the One Who Would Be Ruler.

She saw, if darkly, the shadows of his intentions. How they loomed across the country. She saw the smokes and fires in those intentions. She saw the monuments rise to the new ruler. She saw the divisions darken between those who brought great bags of numbers to the tower of the ruler, and those whose fortunes were filled with holes. She saw the sands run through their fingers. Saw the tatters of their communities. Derelict factories, empty houses. Abandoned villages.

The peoples who had not favored the new Ruler separated, willingly or not, from those who did, their opportunities shrinking. She saw masses of the disfavored ‘others’ cleansed from the land. Gathered into herds and driven from their homes toward the borders of other realms, smaller, less powerful countries that the Ruler forced to accept these deportees. Though these lands did not want them since they had people enough of their own. Still, they were driven.    Fences pierced. Borders crossed. People herded, forced along by men in uniform bearing weapons.

She saw other men, armed men, walking the streets of UZ’s cities and towns with the slouching superiority of the conquerors. The New Force with its new uniforms of a dirty northern green, the boreal green of the cold, polar-tending places, patrolling the streets with automatic weapons. Given a wide berth by ordinary folk, the permanently occupied citizens of the Commonhope of UZ.

She saw the Festivals of Money. Grand, palatial interiors inside the transparent many-storied towers of the New Wealth, mirrored and chandeliered, fitted with ice sculptures and artificial waterfalls; with cascading gardens of hanging flowers made of vinyl, where snowfalls of paper currency floated down from the balconies to the laugh-choking, breathless hysteria of the costumed guests, wearing the gowns and uniforms of Long-Past Eras of wealth and ostentation: the bangles and boas, and feathers and cockades and robes, and caped splendors of the regal courts of ancient regimes… Saw them squealing and laughing and scurrying and squabbling among themselves to gather up huge handfuls of the carelessly dispossessed wealth of the nation.