I’ll be speaking on my novel “Suosso’s Lane” at the I AM bookstore, 189 North St., just off Revere Square in the North End of Boston, on Tuesday, Aug. 30, 7 p.m. A new store, I AM describes itself as the country’s first Italian American bookstore.

Here’s some of what I’m planning to say.

The anniversary of the Aug. 23, 1927 executions of Sacco and Vanzetti — celebrated last week by the Sacco-Vanzetti Commemoration Society in Boston —  seems a good occasion for looking backward, and forward, and all around us today for important social and political currents in American society.

Today many Americans are saying that the country is changing too fast and for the worse. That people who were born here, who’ve lived here all their lives, who believe that they “built this country,” are being left behind. Jobs are being shipped overseas, the industries that made their communities prosperous are drying up. In some parts of our country cities and towns are turning into ghost towns. People like “us” (and when Americans say “us” they most often mean native-born white people) aren’t doing better than previous generations, they’re doing worse, and in some cases they’re barely hanging on economically to their place in the social ladder.

They’re looking for somebody to blame for their declining circumstances. There are some obvious candidates, such as (number one) corporate wealth and domination of government. And, two, closely related, the increasingly steep gap between the super-rich and everybody else.

Instead, however,we’re seeing the rise of demagoguery as a major party candidate seeks to scapegoat immigrants, religious minorities, and nationals from certain countries who seek work and opportunity in the US, some of them without papers.

That’s today. But what were things like back in Bartolomeo Vanzetti’s day? Vanzetti came to America in 1908. It was not an unusual choice. Between 1880 and 1920 an estimated 4 million Italians entered the US; many other immigrants, mostly from southern and eastern Europe, came to the US at the same time. Vanzetti left his home in the Piemonte region after the death of his beloved mother; and after nearly dying himself from the effects of over-work in the unhealthy atmosphere of pastry-making factories.

What did Vanzetti find in the America, the new world, the land of freedom and opportunity. He found many poor, exploited laboring people. And a very small wealthy class who owned most everything and dominated a government that had no interest in improving the lives of ordinary people. The material well-being of ordinary Americans was not a subject government need concern itself with.
Like many others who arrived here without family or friends in this country, Vanzetti found a place at the bottom rungs of the social ladder. He worked at the laboring jobs typically available to immigrants in NYC and surrounding areas for several years, sometimes sleeping in doorways.
When I began thinking about writing a book about Vanzetti’s life in America, I asked myself what kind of man was Vanzetti? Here are some of my answers.
An exploited child laborer – sent off by his father at age 13 to work in factories as an apprentice pastry maker. A man who loved children, who regarded himself according to Beltrando Brini, a child of five when Vanzetti became a boarder in his family’s household, as his “spiritual father.” A man who exhibited great kindness and courtesy to women. A man for whom the model human being, the most important person in his life, was his mother, the woman who nursed him back to health when he was sent home from a factory with a lung disease, pleurisy, from which he was not expected to recover.

See my blog prosegarden.blogspot.com for the rest of the story: 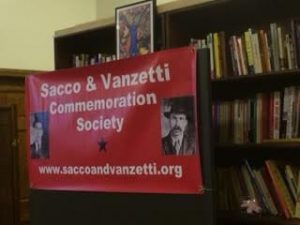